Last week, I’ve played a little bit with the Netflix prize dataset and NC-ISC. The results are amazingly better than the current state of the art.

Netflix dataset contains ratings of movies by user. We try to predict unseen good ratings (a few ratings are kept aside in a separate dataset, and we try to see if we can predict that a given user would have rated those particular movies).

I’ve compared state-of-the-art results with my method, NC-ISC. With the best settings, I can predict 24% of the unseen ratings in the first 50 results, compared to 19% for the current best methods. Considering the fact that a non personalized prediction, based on popularity only, gives a 10% score, what we achieved is a 55% improvement over the current state of the art.

This is a huge gain.

And it could be applied to other recommendation problems : music, jobs, social network, products in e-commerce and social shopping, etc.

A bit of context

The Netflix Prize was an open competition held in 2009. The dataset consist of 100M ratings (1-5) given by 400K+ user on 17K+ movies. The original goal was to predict « unseen » ratings with the highest possible accuracy. The measure used was the RMSE (root mean square error) on the hidden ratings. 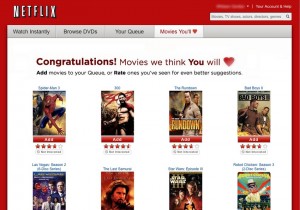 The RMSE, however, is a very incomplete evaluation measure  (and also it cannot be estimated on the results of NC-ISC, which is one of the reason we haven’t spent much time to compare our results with the state of the art). Indeed, the common task for a recommender system is not to predict the rating you would give a given movie, but to provide you a list of K movies that you could potentially like.

As a result, more and more effort has been put on the so-called top-K recommender task, and as a side effect on learning to rank instead of learning to rate.

I’ve stumbled recently on an interesting paper : Alternating Least Squares for Personalized Ranking by Gabor Takacs and Domonkos Tikk, from RecSys 2012 (which has been covered here), and found myself happy to find a paper with results I could compare to (often, either the metric, or the dataset is at odds with what I can produce/access).

So I ran NC-ISC on the same dataset they used in the paper (just keep the top ratings), which reduce the train dataset to 22M ratings and the probe to 400K ratings. At first the results were very disappointing. The main reason for this is that NC-ISC inherently discards any bias on popularity. And the fact is, ranking Movies is a very popularity-biased problem (below we can see that 15000 movies have very few ratings in the test set, while a few movies have 12000 ratings) : 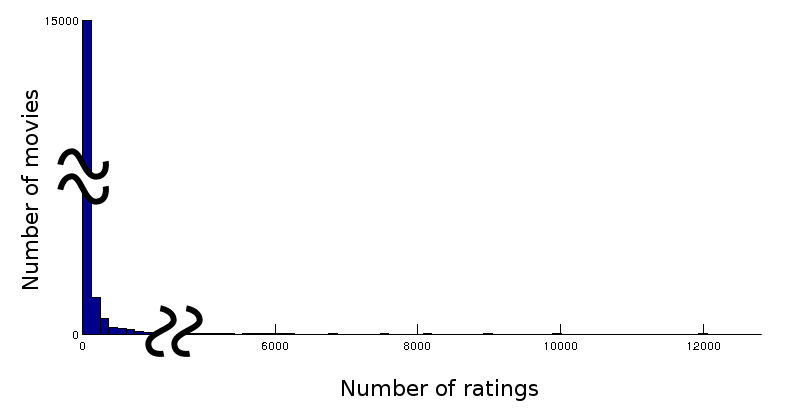 And here we come (I’ve added my results as an overlay to the original paper figure). Just a disclaimer : while I’ve reproduced results from the popularity baseline, I didn’t have the time to check the implicit ALS results (I’ve got an implementation here in Octave that take hours to run), so I’m not 100% confident I haven’t missed something in the reproduction of the experiment. 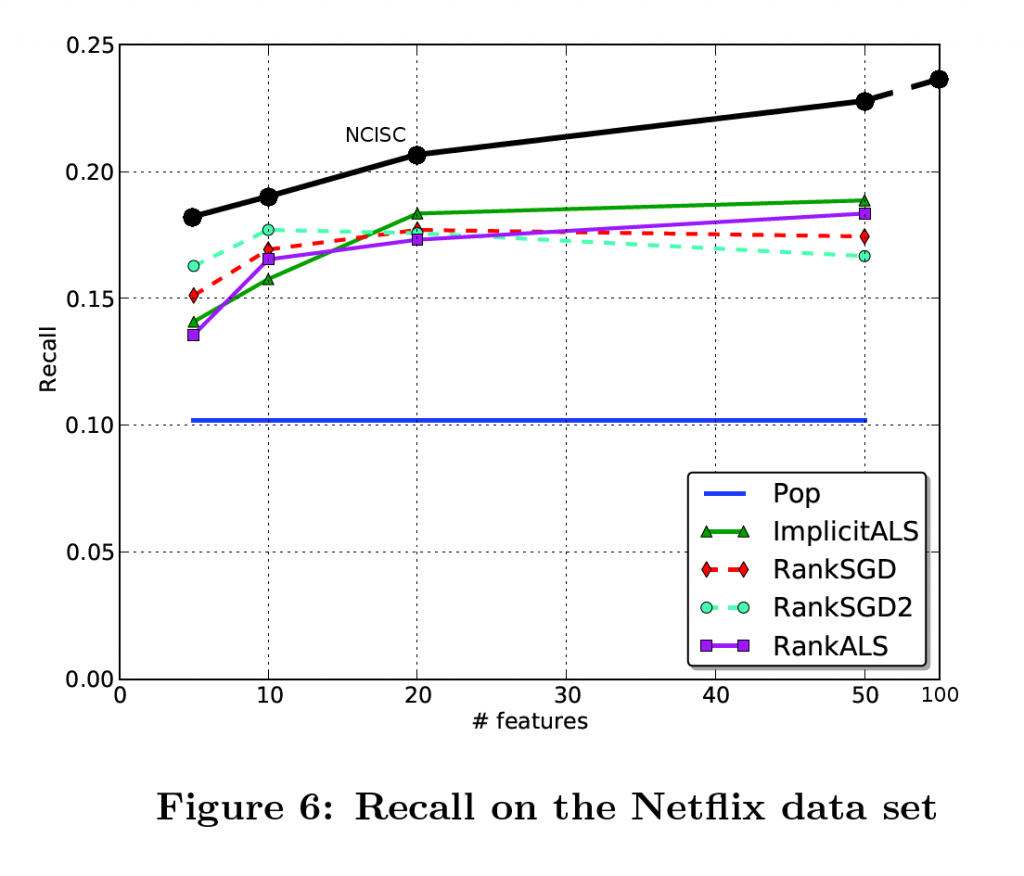 I’ve added a mark for 100 features, which wasn’t in the original paper, probably since there results tended to stop improving.

A short note about NCISC performance versus ImplicitALS, RankALS and RankSGD. First, while SGD takes on average 30 iterations to converge, ALS and NCISC takes between 5 and 10 iterations.

Finally, I’ve run my unoptimized algorithm using 1 core of a Core i7 980 (cpumark score 8823 for 6 cores), while they have used 1 core of a Xeon E5405  (2894 for 4 cores) to run their unoptimized RankALS and ImplicitALS and optimized RankSGD algorithms. The rescaling factor to account for the processor difference is thus exactly 2 (!)

Here are my rescaled timings and the original timings of the other methods (remember it’s not an optimized version, though):

Time (seconds) per iteration for various # of features.

Speedup range from x3 to x167 per iteration (for SGD you should account for the increased number of iterations required). I’ve generally observed that my optimized implementations of NC-ISC run 10 to 20 times faster than my Matlab implementation.

I had a few busy days lately, eXenSa  is officially created since the 3rd of April. As I’ve quickly sketched before, eXenSa will propose automated product recommendations to e-commerce site. The most important innovation is the fact that, by using and learning semantics from several e-shops, we will be able to recommend stuff with few data from user actions. As a consequence our market target will include much smaller e-shops than other recommendations providers (this in addition with the excellent quality of our recommendation engine, of course).

Recommendation engines are nothing new. Many algorithms can be used to obtain results of variable quality, and a lot of people jump in the ship (including myself). Now that the eCommerce market is really mature, and now that anyone with a bit of technical knowledge and a lot of will can start an eShop, everybody is going to look after systems that they can plug into their shop in order to obtain better product recommendations.

Here is a list of recommendation service providers I’ve found so far. Obviously some are taken from the wikipedia page

As a followup to my researches on documents and / or vocabulary characterizing, we are preparing (some friends and myself) to launch a new recommendation service. Our first targets are eCommerce sites that can greatly benefit some improvement over the products they show to the users (whether it’s in the recommended items list or in the display order of a search query). Amazon reportedly has a 30% share on its sales that directly comes from recommended items (and their recommendations are not unanimously acclaimed). Now the question will be : why will my algorithm be better than the others ? and why should you use it.

As stated in this article, the data you collect is more important than the algorithm you use. That will always be true : with no data at all, the best algorithm will always perform worse than a clumpsy algorithm working on tons of excellent and clean data. That’s almost tautological, but sadly true, no miracle can come only from the algorithm. Now, if you do your best at collecting data, then the algorithm can make a real difference (take for example my article about the 20 newsgroups experiments : while most high performance existing algorithms can only take into account a few words, mine does much better because it can seemlessly handles all available data. Also, in my previous note about Ohsumed, I show that with exactly the same data, my algorithm NC-ISC can largely outperform other state-of-the art methods.

Now that you’re persuaded that my algorithm works for document retrieval, I must convince you that it will also work on other topics : recommendation / collaborative filtering is a quite standard task in machine learning community, and it has already gathered a lot from computational linguistics methods (see RSVD for instance). The idea is this : in both cases (information retrieval and recommendation systems) we have a few relational information between type A objects and type B objects.

In IR, type A are words, type B are documents, the relation being the fact that a word appears in a document. In recommendation systems, we have users as type A objects and products as type B. The relations can be « view », »buy », »put in basket », etc.

In both case, the idea is to fill the blanks in the matrix, or, to guess the strength of the relation between any A object and any B object, wether they have been observed before or not.